The Dacia factory in Mioveni celebrates the production of 300.000 units of Logan MCV. The model celebrates 4 years from its official launch and proved to be extremely popular on the Western European markets. The MCV is the second member of the Logan family and was launched in October 2006, immediately after the official presentation on the Auto Motor Show in Paris.  The Logan MCV range was restyled in October 2008 and has four equipment versions: Ambiance, Preference, Laureate and Prestige. All four versions of equipment are available in two configurations – with five and seven seats.

The Logan MCV unit number 300.000 has a red color, is powered by an 1.5 dCi engine, it is a version with five seats and will be delivered to a customer in Italy.

In Romania the cheapest Logan MCV cost 8.400 euros with all taxes included. The most expensive version of Dacia Logan MCV is a Prestige version and has a price starting from 12.900 euros, has seven seats and an 1.5 dCi engine. 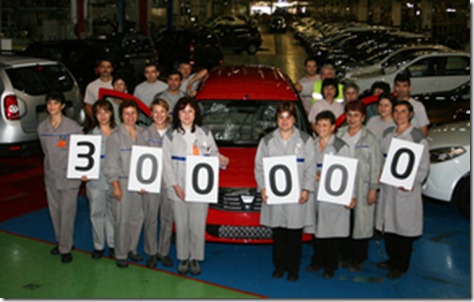