Dacia will replace the current Logan with a new model that has the code name X52. The X52 project  is in progress and will benefit from more efficient engines with lower carbon emissions and lower fuel consumption. The future engines will be made on the same architecture as K7 with 1.4 and 1.6 liters. Most likely the 1.2-liter engine with 16 valves will not get too many changes.

"We have new projects with Volkswagen and Renault. For the future X52 model we will have basically the same engines with small changes. They became more efficient and with lower carbon emissions and lower fuel consumption," said Catalin Tischer, the General Director of Mahle, the supplier of air filters for Dacia and other major European car manufacturers.

The Logan’s successor will have to compete in 2012 with new models that will be launched by Citroen and Peugeot. Besides these, Skoda promises for some time a low cost model that will rival Logan and other major car manufacturers also have in plan to launch a low cost model. It remains to be seen whether the Dacia-Renault will be able to apply the new recipe for success that characterized the Logan model in the case of the second generation. This time, the Romanian car manufacturer has all eyes of the European market fixed on it. 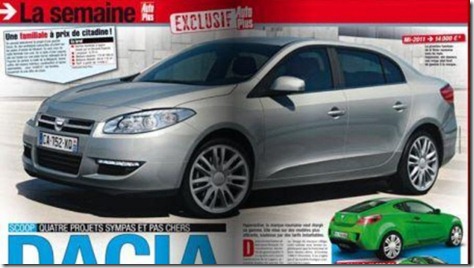